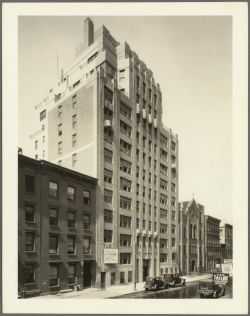 Or Olam -The East 55th Street Synagogue was originally founded as Chevra Bnei Leive, in 1906. Its founders financed the purchase of our current building at 308 East 55th Street from a Baptist church in 1916, at a time when East 55th Street was paved with cobblestones and horse carts still gathered at the public market beside the Queensboro Bridge. (Or Olam is the small building on the right of this 1932 photo; it was given a Deco-style granite facade in the 1970s.)

In 1966, responding to the changes in the community’s demographic profile, the congregation affiliated with the Conservative Movement. One year later, Reuven Siegel, z”l, a JTS graduate, was appointed its first full-time rabbi. Several members of his former Bronx Congregation joined the synagogue, and under the Rabbi Siegel's leadership, membership grew from sixty families to more than 150.

The retirement of Rabbi Siegel in 2006 coincided with the completion of the synagogue’s first century. In honor of his long, dedicated service, he was named Rabbi Emeritus, a position he held until his death in 2011.

Our clergy go on to distinguished positions within the Conservative Movement. Rabbi Siegel was succeeded in 2006 by Rabbi Jan Urbach, the noted scholar and liturgist, who currently holds a faculty position at the Jewish Theological Seminary and leads the Conservative Synagogue of the Hamptons. Rabbi Urbach was succeed in 2010 by Rabbi Ephraim Pelcovits, who left us in mid-2015 to take a position as Associate Dean at the Ziegler School in Los Angeles. Hazzan Bonnie Streigold recently moved to Long Island, where she is Hazzan at the Hewlett-East Rockaway Jewish Center.  We are currently led by Rabbi Eugene Wernick and Cantor Shiree Kidron.

Throughout its history, our congregation’s strength has been the diversity of its membership, welcoming not only Jews of European descent, but also those from Israel, Iran, Iraq, Egypt, South Africa and South America. Our rituals and liturgical melodies reflect this cultural richness. Our social attitudes are progressive, egalitarian with respect to participation in all rituals and recitation of the liturgy and embracing of members of the LGBT community.

We just completed a renovation of our historic sanctuary, which now features beautiful new pews, a lofty beamed ceiling, a new heating and A/C system, new lighting and a new sound system, making it a light-filled, inspiring place for thoughtful worship.